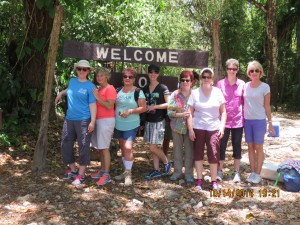 Recently I returned from taking a team of 8 to Belize on a missions trip with Thirst Missions. This was a first time experience leading a team. The team came from as far away as Australia. While we had a schedule and itinerary God showed up each day in a variety of ways.

When we drove up to our accommodations we all looked at one another for surely this did not look like the hotel in the picture we were sent. Our hotel now looked like a ski chalet! There was a river out front. We had a kitchen, a bedroom in a loft, another bed and a pullout sofa bed! It was larger than many apartments. We were told that the hotel we were to stay in was in the middle of town and very noisy. We had air conditioning and a water cooler. What an upgrade!

The church we were connected to for ministry was a spirit-filled church. They worshiped in what looked like a picnic pavilion. There were no walls, only a cement floor and a tin rippled roof. We were welcomed and treated like royalty. The Holy Spirit showed up for ministry every time we had a service there. He is not interested in the type of building we hold services in, He is interested in the heart of the people. These people were hungry for more and the Lord answered them. We don’t have all the accounts of the many hearts that were touched and transformed, but many people cried, shook and laughed when encountering the Holy spirit.

One day we bought groceries for the poor. When I say poor, I mean poor. These people lived in shacks that you and I would not even put our lawn mower in. We had groceries for 6 homes. The first home we saw a teenager receive salvation! We saw 2 people fall under the power and a third receive prayer for healing of the kidneys. This goes to show that the power of God wants to be outside the walls of the church!

In one of the homes there was an old woman who had trouble seeing out of her right eye. The team had 4 people hear the Holy Spirit say to make mud and put it around her eye. So that was done, she washed it off, and her vision was better! Not fully restored, but almost! We believe God will fully restore it!

In another home, this was my favorite highlight, was a man crumpled over in a chair. He had been in a car accident 5 months ago. His wife had been killed. The man had 2 broken legs and a head injury. He could not walk except with severe pain and he used a walker. He did not walk much. Our team prayed and after a bit, they pulled him to his feet and he began to walk normally and he walked out to the end of his driveway! No more pain! He did not need his walker! A couple days later the pastor went to visit and the man was not home. He was out walking! He had 4 kids to take of.

We had many opportunities to minister. We went into the school and prayed for the kids. We went into the hospital and prayed for the sick. We held a youth meeting. We ministered in two churches a total of 5 times. God was there each and every day. We took 100 Bibles to them. We blessed and honored the church Pastors, the cooks, the maid and the guides.

Unto the Lord, be all glory, honor and praise!
Diane